As you might know, I changed countries and positions in the last month, hence my lack of posts (now and probably in the very near future). As some of you might know, I left academia to work at the Nuffic, the Netherlands Organisation for International Cooperation in Higher Education. This week I started in the department of studies of their Knowledge and Innovation Directorate. One issue I’m currently looking at is the way foreign students choose their preferred study destinations. Market research organisation i-Graduate seems to have found all my answers already… or hasn’t it?

The Guardian reports on a study that looks at what motivates international students to study abroad and what influences their choice of study. I haven’t seen the study and I can’t link to it because it is not available on their website, but looking at the article of the Guardian, it seems to be a case of over-simplification and over-generalisation. According to i-Graduate, the international student population can be divided into five tribes: 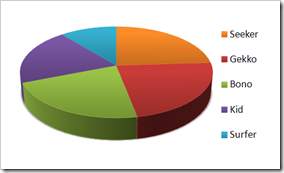 First, there are the “seekers”. These students are often at home on engineering, science and business degree courses. They are driven by their parents’ wishes that they secure a good job. They are not fussed about earning megabucks or changing the world. The seeker is happy if its parents are. I-graduate says students from Hong Kong are often seekers. About 24% of the 25,000 international students it polled were in this tribe.

Then there’s the “gekko”, after the hair-gelled and power-hungry corporate finance boss Gordon Gekko of the 1987 film Wall Street. The gekko can be found craving peers’ respect. But even more important to the species is the potential to command huge sums of money. They care about one thing: cash. I-graduate says Polish students tend towards this tribe, as do those studying creative subjects, business and engineering. About 23% of those polled were part of this tribe.

What of the “bono”? This international student is more idealistic than the rest. He or she can be found worrying in a corner about the difference they can make to the environment and is at home on language, science and creative degree courses. They are more influenced by tutors than parents. I-graduate says postgraduates are most likely to be part of this tribe, as are students from the Netherlands and the US. About 22% of those quizzed were members of this tribe.

Then there’s the “kid”, who can be seen wandering aimlessly across campus. The kid lacks focus and is searching for something easy to guide it. It might be for this reason that the kid is the most influenced by university league tables of any of the five tribes. Many of this tribe’s members are undergraduates, but not all. I-graduate says students from Pakistan are often members of this tribe, as are engineering students. A fifth of those polled belonged to this tribe.

And, finally, there’s the “surfer”. The surfer is just looking for fun and is less ambitious than members of the other tribes. He or she cares less about the future and job security than his or her peers. Despite the name, the surfer can be spotted at all universities, not just those on the coast, and is often at home on language degree courses. I-graduate says Spanish and Japanese students tend towards this tribe. About 11% of those polled were members.

The Guardian also asked some experts about their opinion on these ‘tribes’. A few think that the study might be helpful. I tend to agree with the others, who see it as stereotyping and see the nationality tagging of the study as unhelpful or even demeaning.