Ranking season is over. Yesterday, the Times Higher published its new ranking and that also marked the end of the ranking season for this year. After the Shanghai Jiao Tong ranking, the Leiden ranking, the QS ranking and the Taiwan ranking, this was the fifth attempt to illustrate the differences in quality of the world’s universities. Whether they succeeded in this remains a question of debate.

Although there are quite some differences in the results of the rankings, a few common observations can be made. First of all, it is clear that the United States still is home to the best universities. In all rankings the US universities are dominant and Harvard is the undisputed leader. Only in the QS ranking it was a non US university  – Cambridge – that topped the list.

Another observation is that non of the rankings manage to sufficiently capture the quality of teaching in their assessment. The THE ranking made an attempt to do so, but most of their indicators still reflect research quality and prestige more than the quality of teaching. The Shanghai, Leiden and Taiwan rankings put most emphasis on research.

Even though the ranking predominantly assess research – although in different ways – the results are very different. To illustrate this point I have mapped the results of the Dutch research universities in the different rankings. The results are shown in the graph below (click to enlarge). 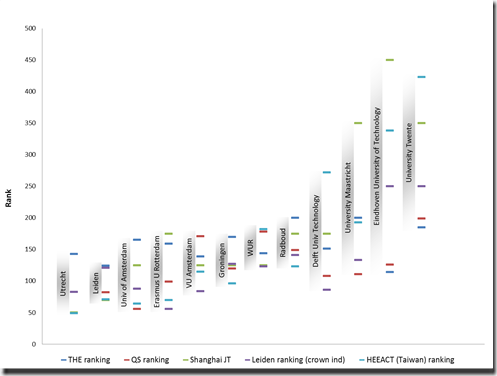 The results for the twelve universities (the thirteenth, Tilburg University somehow doesn’t appear in the rankings) show a substantial variation for all universities. For universities like Eindhoven, Twente and Maastricht, the variation seems exceptionally large. Eindhoven for instance was ranked as the best university in the THE ranking while performing worst in the Shanghai ranking. Leiden shows the least variation but here the difference between its rank in the Shanghai ranking (70th) and the THE ranking (124th) is still enormous.

Earlier this week at the OECD/IMHE conference Charles Reed, Chancellor of California State University, critiqued the rankings (“rankings are a disease”) and argued that all universities add value. I guess he’s right. And the value measured by one ranking seems to be quite different than the value measured by the other…