What is this about? It’s about a new information resource in higher education: University World News:

With international competition and collaboration between universities growing apace, it has never been more important for higher education managers, researchers, scholars and public officials to keep abreast of developments in their field and in rival and partner institutions worldwide.

University World News is the first high-quality truly international newspaper and website, dedicated to providing such coverage. Supported by some of the world’s most experienced education journalists, and aimed at higher education readers worldwide, it is offering a weekly emailed newspaper plus access to a dedicated news website – free of charge.

Although the composition of its board is a bit biased towards the Commonwealth (except for one Dane), the articles cover countries from Greece to South Africa and from Germany to India and are provided by correspondents scattered across the globe. It’s still a bit low on content but I think they are only in their first week. I’ll keep an eye on it. Only one small thing. If anyone of UWN reads this: please add an RSS feed.

One of the major current issues in (higher) education policy – in my opinion – is the issue of excellence versus equity. Is it most important to focus on the masses and see to it that everyone gets the same high quality education? Or should the country’s prime talents be nurtured and given the opportunity to fully exploit their opportunities. Or, better yet, can you do both?

The BBC Radio Documentary series ‘The Changing World’ investigates the dilemma, and what better places to visit than Finland on the one hand and the UK and US on the other. Finland is generally seen as the success story in creating a high quality egalitarian knowledge society. Finland shows very good results on the global tests like PISA (Programme for International Student Assessment), TIMSS (Third International Mathematics and Science Study) and IALS (International Adult Literacy Survey).

In addition, they manage to do so without having schools that really fail. The range between the outcomes in the best and the worst schools is very small. An interesting observation in the interviews is that the consistent high performance of Finish schools is not only a consequence of their egalitarian education system, but also of the stability and equality in Finnish society as a whole. Major differences between suburbs or districts don’t exist and therefore major quality differences between schools don’t exist either. This of course sets limits to the transferability of the Finnish system.

END_OF_DOCUMENT_TOKEN_TO_BE_REPLACED

The Nobel Prizes for the sciences have been awarded in the past few days. Since I have nothing smart to say about the use of embryonic stem cells, giant magnetoresistance or chemical processes on solid surfaces, I had a look at the careers of the Nobel Prize winners. 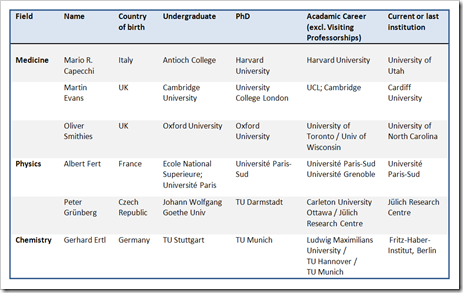 END_OF_DOCUMENT_TOKEN_TO_BE_REPLACED

Dutch newspaper the ‘Volkskrant’ has published its annual list of the 200 most influential Dutch people. The list portrays the Dutch ‘old boys network’ that rules the Netherlands through its interpersonal networks and interlocking boards and directorates. Clearly, the strength of weak ties at work; but how are these ties connected to the Dutch universities?

Topping the list this year was Alexander Rinnooy Kan, Chairman of the Social and Economic Council of the Netherlands (SER). His current profile lists chairmanships/memberships of a wide variety of boards and councils, ranging from multinationals to business schools and from museums to hospitals.

The list is assembled according to a network analysis by the Erasmus University in Rotterdam and uses a database of over 8,000 persons. The ranking is based on more than 5000 positions in 1098 bodies in 518 organisations in various sectors. The Queen, Dutch Ministers and Members of Parliament are excluded from the list. For a further explanation of the methodology, have a look here (in Dutch).

I decided to have a closer look at the top 100 and their connections to the Dutch higher education landscape. If we first have a look at the Alma Maters of these powerful individuals, the graph below shows that Leiden University (the oldest university in the Netherlands) has awarded the most degrees to the list. 19 out of 100 attended Leiden University. Interesting detail is that 15 of them studied Law in Leiden (making this club the low countries’ equivalent of the Skull & Bones??).

END_OF_DOCUMENT_TOKEN_TO_BE_REPLACED

Yesterday was the single most (ok, second most) important

annual event for science: the Ig Nobel Prize ceremony. The Ig Nobel Prizes have been awarded since 1991 for those scientific achievements that first make people laugh, and then make them think. They ‘celebrate the unusual, honor the imaginative — and spur people’s interest in science, medicine, and technology’.

In Harvard University, great scientists gathered to hear who would follow in the footsteps of eminent illustrious intellectuals like:

Daniel Simons of the University of Illinois at Urbana-Champaign and Christopher Chabris of Harvard University, for demonstrating that when people pay close attention to something, it’s all too easy to overlook anything else — even a woman in a gorilla suit. (Winners Ig Nobel Prize for Psychology, 2004)

Ben Wilson of the University of British Columbia, Lawrence Dill of Simon Fraser University [Canada], Robert Batty of the Scottish Association for Marine Science, Magnus Whalberg of the University of Aarhus [Denmark], and Hakan Westerberg of Sweden’s National Board of Fisheries, for showing that herrings apparently communicate by farting (Winners Ig Nobel Prize for Biology, 2004).

END_OF_DOCUMENT_TOKEN_TO_BE_REPLACED

As a European, my view on the relation between the university and sports is very straightforward. There’s a health related function and a social function: the university provides facilities for students and staff to stay in shape and stay in touch. Simple as that!

As a European in Australia, the prominence of athletics on campus surprised me in the early days when I got here (I’m pretty much surrounded by ovals and tennis courts). But then again, sports are pretty much part of everyday life here (especially the past few weeks) and obviously, that’s reflected in campus life.

In the United States, this relation is taken a step further. And not without controversy. Escalating coaches’ salaries and the long-term bonded debt required to finance new arenas, stadiums, and other capital projects have a growing number of university leaders worried that college sports might not be as financially sound as it appears. Many academics are getting increasingly frustrated as well by the fact that universities overspend on sports at a time when its academic programs are deteriorating from financial starvation.

I was well aware of the importance of athletics at US campuses and the controversy surrounding it. But still, I was amazed by the excessive spending reported in this article about the University of Texas in the Statesman (thanks to the CCAP Blog).

Here are some figures:

END_OF_DOCUMENT_TOKEN_TO_BE_REPLACED

To what extent can you ‘build’ a high quality university from the ground up? Hard to say, but as long as you got plenty of oil money, why not try? The Saudi government is embarking on a very ambitious project and puts its billions behind Western-Style Higher Education. But Nature questions whether one of the fundamental principles of a ‘western style’ university (or in my opinion, any university) applies in Saudi Arabia and asks whether a Saudi university can think freely? Ziauddin Sardar, a UK-based writer, is skeptical:

“The bureaucratic police state will no doubt buy the best scientific equipment and personnel that money can buy. But it cannot provide the atmosphere of criticism and openness that scientific research needs to flourish.”

Saudi Arabia does not exactly have a long history of higher education. Even though oil production transformed the country into one of the richest in the world, the higher education system has not kept pace. In 1975 a Ministry of Higher Education was established, but it took until this century before serious investments were made in the creation of universities and colleges. Royal oil dollars are now pored into the system in order to create their own Yales and Harvards: