I’ve asked the question before whether ASEAN was becoming like the EU. I agreed with former ASEAN Secretary General Severino who answered that it is “most likely not. At least not exactly”. Now we can ask another question: is the ASEAN starting its own Bologna process? It appears to be doing so…

The Australian reports on a meeting in Bangkok last week:

Arguing the case for an extensive overhaul of co-operation and compatibility involving 6500 higher education institutions and 12 million students in 10 widely differing nations is no easy task; and it’s particularly onerous if the deadline for implementation is 2015.

Five of its member countries were asked by SEAMEO RIHED to explore the possibility of a higher education common space in the ASEAN region. Summarising the findings, Malaysia’s Higher Education deputy director-general Yusof Kasim told the conference that:

there was broad agreement that harmonisation was beneficial, at least among those who were aware of the philosophy.

We don’t want to have one system but compatible and comparable systems. We can agree on certain standards, the most important thing is the outcome. Equivalency was crucial but it should be equivalency of outcomes rather than years spent earning a degree.

These initial discussions definitely sound similar to the ones at the start of the Bologna process. Considering the diversity of higher education systems in the ASEAN region – mixtures of English and American systems, sometimes with a Dutch, French or Spanish flavour and adapted to local  cultures and on top of that, a huge variety in terms of quality – it will be a considerable task. I do believe that in the end it can be very beneficial to the ASEAN member countries and their universities. Although I think that seven years might be a bit over-optimistic, I definitely welcome the initiative. Let’s see whether – in ten years – we’ll be talking about the Bangkok Process…

There have been quite some controversies about the salaries of university leaders, especially those in the public sector. Philip Altbach and his colleagues from the Boston College Center for International Higher Education have now published a report comparing the salaries of academics around the world. Here are the results, summarised in one single picture: 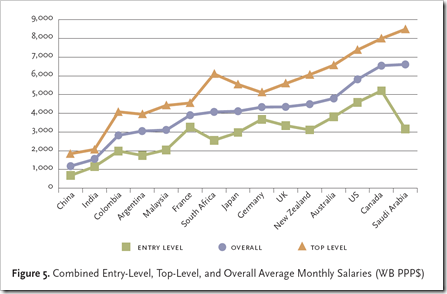 Conclusion? It pays of to work hard in order to get to the top, especially in South Africa, New Zealand and above all, Saudi Arabia. Not so in France and Germany (surprise?). Furthermore, an advice for academics who aspire to have an international career and want to maximise their salaries: look for extreme weather conditions. They would be best of to start their career in Canada and end up in the global classrooms in the Saudi Arabian desserts.

In addition to offering high salaries for top academics, Saudi Arabia is also actively recruiting scholars from Europe and North America. Global Higher-Ed has a post on a faculty recruitment video of the King Abdullah University of Science and Technology. Conveying a ‘unique semi-territorialized live-work-play message’ they target a mobile “world class” faculty base to come and live, work and play in Saudi Arabia. I’m sure that an average monthly top-level salary of US$8,490 helps. But then again, there are other things that count as well…

Universities are becoming popular with donors. A recent report from private banking firm Coutts in association with The Centre for Philanthropy, Humanitarianism and Social Justice University of Kent showed that in the UK, rich donors are more likely to give to universities than any other good cause. The Coutts Million Pound Donors Report (pdf) indicates that higher education received 45 donations of over a million pounds in 2006-2007. The total value of million-pound-plus donations to higher education was £296.5 million. Of direct donations over 1 million pounds in the UK, 42% went to higher education, folowed by Health (13.8%), International Aid (11.5%) and Arts & Culture (8.2%). 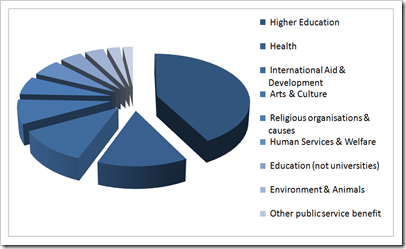 The Financial Times discusses the issue and asks whether rich people should be giving their money to institutions that also receive millions from government and are in some cases quite wealthy. The fundraising director of Oxfam Cathy Ferrier seems to concur and her words show that there is fierce competition in philanthropy land:

“The higher education sector have very effectively used their contacts, despite the fact there’s state funding for this stuff”. She suggested that rich donors liked schemes which were “highly tangible, relatively visible and close to them”, such as university buildings that “they feel are their legacy”.

The country of million dollar donations is of course the US. According to the Chronicle, the country’s colleges and universities raised $28-billion in private donations in the 2006 fiscal year, $2.4-billion, or 9.4 percent, more than in 2005. Stanford receiving 400 million from Wiliam Hewlett; David G. Booth donating 300 million to the University of Chicago business school; Ratan Tata giving 50 million to his alma mater Cornell, etc. But also outside the Anglo-American world multi-million dollars are being  donated to universities. The Singapore based Lee Foundation donated 50 million to the Singapore Management University – matched by the government with 3 S$ for every donated S$. Coffee magnate and Adecco chairman Klaus Jacobs for instance donated 200 million to the private International University Bremen. Compared to all this, the Netherlands has a long way to go. In 2005, all education and research received 277 million Euros, with 232 coming from business (see Geven in Nederland 2007, pdf).

As for Ferrier’s critique, I think that needs some nuance. Giving 300 million to a business school in order to see your name attached to it – yes it became the University of Chicago Booth School of Business – is not necessarily helping humankind progress all that much. But on the other side, donations for scientific research on HIV or cancer or research on other pressing issues are not necessarily in conflict with donations for health or international aid. Ratan Tata’s donation to Cornell for instance was given for agriculture and nutrition programs in India and for the education of Indian students at Cornell. I’m sure even Oxfam wouldn’t disagree with those objectives.