“International mobility of human resources in science and technology is of growing importance and can have important impacts on knowledge creation and diffusion in both receiving and sending countries indicating that it is not necessarily a zero-sum game. 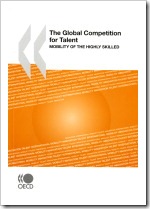 Receiving countries benefit from a variety of positive effects related to knowledge flows and R&D. But sending countries can also experience positive effects. Much of the literature on highly skilled emigration focuses on remittances and brain drain but emigration of skilled workers can also spur human capital accumulation in the sending country. Brain circulation stimulates knowledge flows and builds links between locations. Diaspora networks can function as a conduit in these migration flows so that all countries can benefit.

Most OECD countries are net beneficiaries of highly skilled migration but there are significant variations. Students are increasingly mobile as well and often leads to skilled migration, both short and long term migration. Some evidence suggests that immigrant HRST (Human Resources in Science and Technology) contribute strongly to innovation.”

Skilled migration is an increasingly important rationale for the higher education internationalisation policies of national governments (and of the European Union as well). In this global competition for talent, Australia and Canada have  actively linked the recruitment of foreign students to their skilled migration policies. This approach is also increasingly chosen by European countries. Particularly in the science and technology related fields, skill shortages are becoming apparent and the benefits of (cultural) diversity for innovation are recognised.

And if you need a highly skilled and diverse body of professionals, why not start with foreign students? At Nuffic we recently published an appeal for an increased attention for internationalisation. In this appeal, the skilled migration approach is clearly apparent (see here for the Dutch booklet, or here for the English translation). Obviously, we are of the opinion that such policies should not come at the expense of developing countries…

The new OECD report shows again that such policies can create benefits for both the sending and receiving countries. This goes in  particular for emerging economies where the opportunities for brain circulation are present. Other studies – like this world bank report – show that it are the least developed countries that suffer most from the brain drain because brain circulation does not occur in these countries. Here, skilled migration policies should be accompanied by compensating and mitigating policies for the sending countries (see this CGD publication for some ideas on this issue). 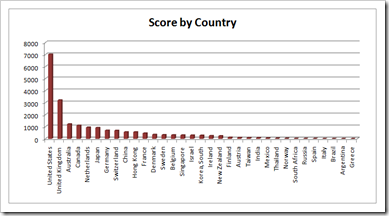 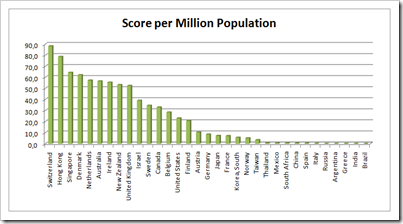 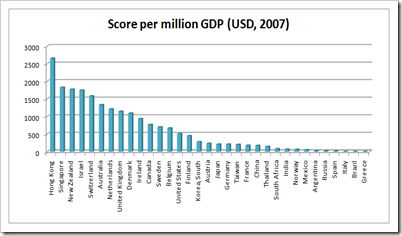 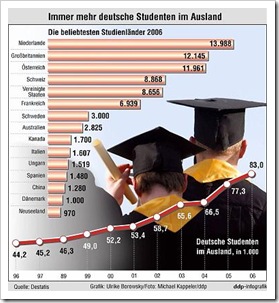 I recently wrote about a German student, Jacqueline Förster, who claimed Dutch financial support for the period she studied at the University of Maastricht. Now there is a German student appealing for the European Court of Justice in order to be admitted to the Medicine programme at an Austrian University. The case of German students in Austrian medicine departments has been addressed here a couple of times. See the posts on Europeanisation by stealth and the one on more Europeanisation.

Since the last post on this issue, two important developments took place. First of all, Austria got permission to keep their quotas for German students in medicine programmes for a five year period (until 2011). And secondly, the Austrians have abolished the student fees in 2007 – after introducing them in 2000. The quotas are now being contested by the German student. And considering the free education in Austria, universities are fearing an unmanageable rush of German students (‘ein kaum bewältigbaren Ansturm’, as the Vice rector of the University of Salzburg put it).

Of course, the students can’t be blamed for this. They are just exercising the rights given to them. And don’t understand me wrong. I think it’s a good thing that students can make their own choice in the university where they want to study, whether that is in their own country or in another European country. In a European system where higher education is still predominantly publicly funded, and funding is arranged on a national scale, coming from national taxes, this type of mobility however might become unsustainable. That is, if it’s distributed highly unequally.

This doesn’t mean that we have to stop the mobility, but it does imply that we seriously have to look at other funding arrangements. In some countries, like the Netherlands, student financial support is already ‘portable’ for students, meaning that students are eligible for Dutch student support, also if they study abroad. This idea could be extended to student funding.

The portability of student funding within Europe should be a serious option here. In this case that would mean that Germany would fund the German students’ education in the Austrian university. This however would require a common policy, agreed upon by all member states, or at least a large majority of states. Politically it will be hard to reach agreement on an issue like this. But it’s better than the option of doing nothing and letting the ECJ determine the course of higher education in Europe.

Of course it is the ECJ’s job to interpret and observe the rules. But it is about time that the Member States agree on the extent of these rules and put the decision-making process back where it belongs: in the democratic European or national parliaments. The last decades has seen a growth in the higher education related cases brought to the ECJ, especially in the 1980s and in the first part of this decade (see below). This is particularly interesting because formally, the EU has no real authority over higher education. Nevertheless, in these cases, the Court has considerably extended the competencies of the European Union in the field of higher education. And for those that think that this expanding role of the ECJ is just an isolated case for higher education: it clearly is not. 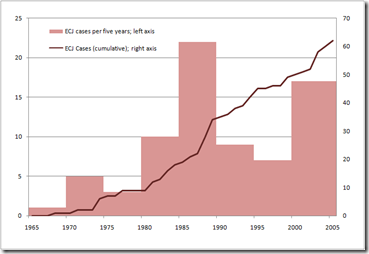 Source: The Emergence and Institutionalisation of the European Higher Education and Research Area Forthcoming in 2008, European Journal of Education  43(4)

Tomorrow’s that day that many university leaders dread. Have they gone up in the rankings or not? For some, rankings may even determine whether they will receive their bonuses or not. But most of all it’s the day for your Vice Chancellor or university president to criticize league tables even though secretly it’s the first thing he or she will check in the morning…

Yes, it’s time for the fifth edition of the Times Higher Education World University Ranking of 2008. Quacquarelli Symonds Ltd, the company responsible for the ranking, claims (again) that the methodology is improved. They are even so blunt to say that ‘the rankings have established themselves as an accepted benchmark of quality’. I beg to differ…

One issue at least seems to be resolved, that is the volatility of the THE ranking (compared for instance with the relatively stable Shanghai Ranking):

The final results will see more countries represented among the top 200 institutions, with Continental Europe beginning to make more of a mark than in previous editions. But there will be less volatility this year, thanks to the change in statistical methodology introduced in 2007. Single outliers no longer have a disproportionate effect on the overall ranking.

The blog turned three a couple of days ago: at the 28th of September 2005 I started  this blog. I  had started my postdoc at Sydney Uni earlier that year and wanted to avoid drowning in theories and concepts and lose touch with what was really happening in the global world of higher education, science and innovation. That has definitely worked and therefore it’s a good thing that many PhD students started blogging, and actually, nowadays many academics are writing about their research and their academic life.

I’m still managing to create a few blog posts a month but unfortunately posting is getting less frequent since I left academia and moved elsewhere. Yet, it’s still good to see many people find their way to the blog. Somewhere this summer, I got my 200,000th visitor. 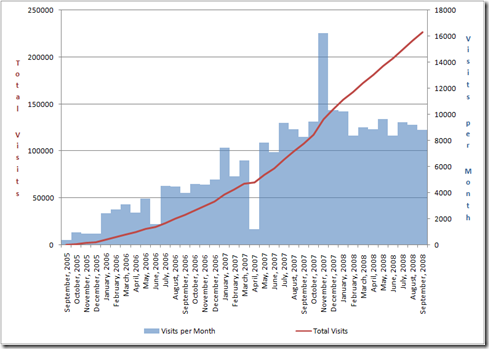 It’s always interesting to see what brings people here. Clearly, the most popular search terms are related to the university league table of the Times Higher. The peak in the chart is caused by a little scoop I had in November, presenting the Times Higher ranking before it was officially published. At least I hope that the people arriving at my blog looking for these rankings take the time to click through the more critical posts on the methodology, risks and consequences of ranking. The THES University Rankings 2008 are expected on October 9…

But fortunately there are also people looking for other things. Although in some cases these search terms really make you wonder… Here are a few examples: