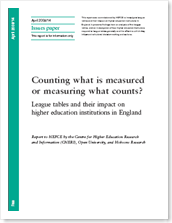 One of the main criticisms of international rankings is that they measure research quality rather than teaching quality. This is especially the case in for the Shanghai Jiao Tong Ranking. The THES Ranking uses proxies like employer surveys, student staff ratios and the number of international students in order to indicate education quality. The best known national university ranking is probably the one of the US News and World Report.  However, their proxies for educational quality (such as selectivity) can not be applied in a standardised global setting.

The most ambitious project to date to rank universities on education quality is the plan of the OECD to rank according to learning outcomes. Andreas Schleicher, the OECD’s head of education research explained this in the Economist in November last year:

“Rather than assuming that because a university spends more it must be better, or using other proxy measures for quality, we will look at learning outcomes”

Just as the OECD assesses primary and secondary education in their PISA assessment, it will sample university students to see what they have learned. Once enough universities are taking part, it may publish league tables showing where each country stands, just as it now does for compulsory education. This of course is a very ambitious project, if not over-ambitious. But at the same time, the OECD is probably one of the few international organisations that have the capacity and experience to assess educational outcomesat a (near) global level. Or not?

The Center for College Affordability and Productivity (CCAP) at the University of Ohio recently proposed an alternative ranking of US colleges and universities: