For the EIS 2008 the methodology has been revised and the number of dimensions increased to 7 and grouped into 3 main blocks covering enablers, firm activities and outputs (Figure 1). The purpose of this revision is to have dimensions that bring together a set of related indicators to give a balanced assessment of the innovation performance in that dimension. The blocks and dimensions have been designed to accommodate the diversity of different innovation processes and models that occur in different national contexts. A summary of the European state of innovation is given in the picture below (click to enlarge) 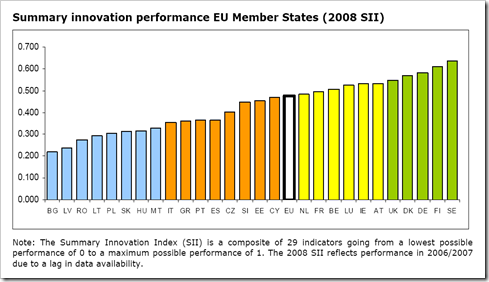 Based on their innovation performance across 29 indicators, EU Member States fall into the following four country groups:

The full report can be downloaded here

I’m reading ‘The Access Principle’ by John Willinsky, a Canadian scholar now at the Stanford University School of Education. He is also the driving force behind the Public Knowledge Project, dedicated to improving the scholarly and public quality of research. I heard about his book some time ago when developing an interest in the open access movement (especially in relation to research in developing countries). But I got really interested after reading the intro to this book review by Scott Aaronson:

I have an ingenious idea for a company. My company will be in the business of selling computer games. But, unlike other computer game companies, mine will never have to hire a single programmer, game designer, or graphic artist. Instead I’ll simply find people who know how to make games, and ask them to donate their games to me. Naturally, anyone generous enough to donate a game will immediately relinquish all further rights to it. From then on, I alone will be the copyright-holder, distributor, and collector of royalties. This is not to say, however, that I’ll provide no “value-added.” My company will be the one that packages the games in 25-cent cardboard boxes, then resells the boxes for up to $300 apiece.

But why would developers donate their games to me? Because they’ll need my seal of approval. I’ll convince developers that, if a game isn’t distributed by my company, then the game doesn’t “count” — indeed, barely even exists — and all their labor on it has been in vain.

Admittedly, for the scheme to work, my seal of approval will have to mean something. So before putting it on a game, I’ll first send the game out to a team of experts who will test it, debug it, and recommend changes. But will I pay the experts for that service? Not at all: as the final cherry atop my chutzpah sundae, I’ll tell the experts that it’s their professional duty to evaluate, test, and debug my games for free!

On reflection, perhaps no game developer would be gullible enough to fall for my scheme. I need a community that has a higher tolerance for the ridiculous — a community that, even after my operation is unmasked, will study it and hold meetings, but not “rush to judgment” by dissociating itself from me. But who on Earth could possibly be so paralyzed by indecision, so averse to change, so immune to common sense?

I’ve got it: academics!

This was just the hilarious but oh so true intro to the actual review. Read the rest here. Or order Willinsky’s book here. And of course you can also download his book for free right here.

What if I graduated from Amherst College or the Ecole Normale Supérieure de Lyon, I was not a European citizen and I would like to pursue a career in the Netherlands? Well, the Dutch government would say I was not educated sufficiently to enter the Netherlands. You might ask yourself why? Isn’t the ENS de Lyon a good school? Actually it is, according to its 72nd place in the 2006 THES rankings.

No, it’s not that ENS Lyon is a lousy university. It’s just that they ended up on rank number 157 of the Times Higher Education Ranking in 2007. And – as I feared before – nowadays in the Netherlands this means that you are not qualified as a skilled migrant. As is stated in the new immigration policy – entered into force this year – only some knowledge workers are eligible to enter the Netherlands:

From abroad, immigrants are only eligible if they graduated from a university in the top 150 of the two recognised university rankings, the league tables published in 2007 by the ‘Times Higher Education Supplement‘ and the ‘Jiao Tong Shanghai University’.

You might argue that ENS Lyon improved its ranking to 140 in 2008. But no…, the Dutch government uses the 2007 league tables. Period!

Or what if I had graduated from some of the world’s best liberal arts colleges? From Amherst, Williams, Swarthmore, Wellesley?

The last edition of the Economist in 2008 included an interesting article on the growth of international education. International education has witnessed an enormous growth in the past decade, a growth that comes with risks and benefits for both developed and developing countries.

The 20th century saw a surge in higher education; in the early 21st century, the idea of going abroad to study has become thinkable for ordinary students. In 2006, the most recent year for which figures are available, nearly 3m were enrolled in higher education institutions outside their own countries, a rise of more than 50% since 2000.