If the research performance is related to university funding, they find a strong positive correlation between national research performance (measured by the top 500 index) and funding per student, as is shown in the graph below (click to enlarge). The US seems to be a bit of an outlier here, pointing to some inefficiency in the US spending on universities (my interpretation, not the authors’). This picture would of course look quite different if the top 50 was taken into account instead of the top 500. 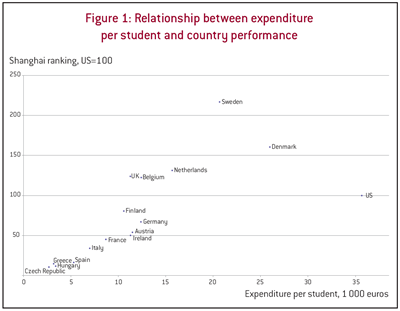 The authors continue by analyzing the relation between expenditure per student and the autonomy of universities. The data on these variables come from a survey send to European universities. I do have some questions on the accuracy of the data because some of the terms used here are rather fuzzy in the European context (for instance the distinction between public and private). But leaving this aside, the most important conclusion is that more funding leads to better research performance, and that this positive effect is intensified by an increase of autonomy, especially budgetary autonomy. Analysis of American data shows a similar effect on the number of patents: the positive effect of funding increase on the number of patents is also here intensified when a university has a greater level of autonomy.

Interesting policy brief, but the question is not so much ‘why?’ European universities need to be reformed, but ‘how?’. And the answer based on this analysis is: spend more money on universities (either private or public money), and give them more freedom. I’m sure universities in Europe will welcome this conclusion. The million dollar questions then of course become how universities should spend this money and how the governments are going to keep them accountable…