Dutch newspaper the ‘Volkskrant’ has published its annual list of the 200 most influential Dutch people. The list portrays the Dutch ‘old boys network’ that rules the Netherlands through its interpersonal networks and interlocking boards and directorates. Clearly, the strength of weak ties at work; but how are these ties connected to the Dutch universities?

Topping the list this year was Alexander Rinnooy Kan, Chairman of the Social and Economic Council of the Netherlands (SER). His current profile lists chairmanships/memberships of a wide variety of boards and councils, ranging from multinationals to business schools and from museums to hospitals.

The list is assembled according to a network analysis by the Erasmus University in Rotterdam and uses a database of over 8,000 persons. The ranking is based on more than 5000 positions in 1098 bodies in 518 organisations in various sectors. The Queen, Dutch Ministers and Members of Parliament are excluded from the list. For a further explanation of the methodology, have a look here (in Dutch).

I decided to have a closer look at the top 100 and their connections to the Dutch higher education landscape. If we first have a look at the Alma Maters of these powerful individuals, the graph below shows that Leiden University (the oldest university in the Netherlands) has awarded the most degrees to the list. 19 out of 100 attended Leiden University. Interesting detail is that 15 of them studied Law in Leiden (making this club the low countries’ equivalent of the Skull & Bones??). 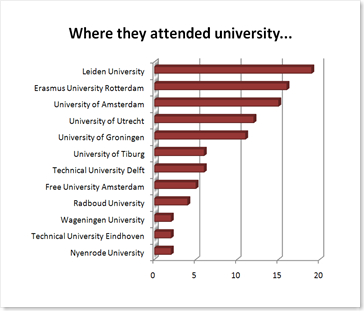 Of the 100 persons, 17 continued to get their PhD degree. Four of them were awarded in Rotterdam (three in economics, one in sociology), three in both Amsterdam and Leiden and the rest in Groningen, Delft, Tilburg and Twente. 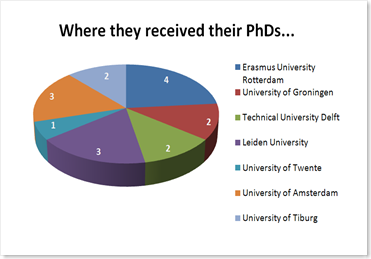 But of course these graphs don’t control for the position in the ranking and they do not include the academic and leadership positions in universities or membership of the Board of Trustees (or Supervisory Boards / Board of Governors). So I decided to take these factors into account (for as far as they were available) in order to assess which university in the Netherlands is most powerful.

And the most powerful university is… Leiden University. With Rotterdam as a close runner up and Amsterdam and Utrecht in third and fourth position. The results (indexed for Leiden = 100) are in the graph below. For the people currently connected to these universities it of course remains the question whether they are there because of their power or wether they are so powerful because they are there… 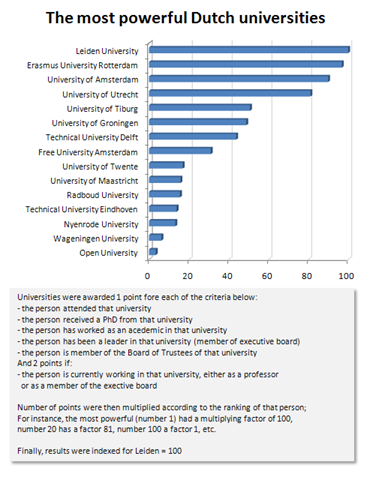