As a European, my view on the relation between the university and sports is very straightforward. There’s a health related function and a social function: the university provides facilities for students and staff to stay in shape and stay in touch. Simple as that!

As a European in Australia, the prominence of athletics on campus surprised me in the early days when I got here (I’m pretty much surrounded by ovals and tennis courts). But then again, sports are pretty much part of everyday life here (especially the past few weeks) and obviously, that’s reflected in campus life.

In the United States, this relation is taken a step further. And not without controversy. Escalating coaches’ salaries and the long-term bonded debt required to finance new arenas, stadiums, and other capital projects have a growing number of university leaders worried that college sports might not be as financially sound as it appears. Many academics are getting increasingly frustrated as well by the fact that universities overspend on sports at a time when its academic programs are deteriorating from financial starvation.

I was well aware of the importance of athletics at US campuses and the controversy surrounding it. But still, I was amazed by the excessive spending reported in this article about the University of Texas in the Statesman (thanks to the CCAP Blog).

Here are some figures:

Jim Coleman, over at the Center for College Affordability and Productivity, compares it with the University’s academic expenditures:

Prima facie, the athletic spending at UT looks fairly high, especially when broken down into per athlete expenditures, but what really makes these numbers pop out is how they compare to UT’s academic expenditures. For the 2006-2007 school year, UT had a core academic budget of 974 million dollars. This money funded salaries, building maintenance, utilities, scholarships, and basically everything else needed to provide the students with the academic resources they needed.

Clearly, the priority of athletics over academic issues becomes apparent in the graph below. And considering the relative increase in budgets, it is likely to be continued. 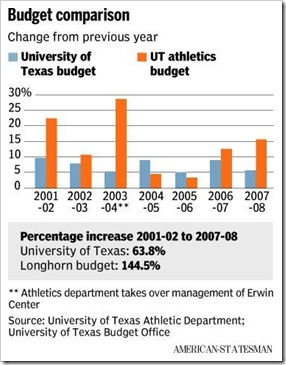 Perverted priorities? I think so indeed. Of course the athletics department is a major source of income and prestige for universities as well, but in this case, every sense of proportionality is lost. Or is that just my European sobriety at work…