It’s been exactly ten years today since the Trisakti tragedy took place in Indonesia and the last  remaining foundations of Suharto’s 30 year rule started crumbling down. During the month of May in 1998, student demonstrations against Suharto were organised everywhere and several incidents occurred on campuses all over the Indonesian archipelago. But the events on May 12 at Trisakti university shocked many and directly led to the fall of Suharto nine days later.

On Tuesday May 12, at around 10.30, thousands of students gathered for a peaceful demonstration on the campus of Trisakti University, located between the airport and downtown Jakarta. On campus, a free speech forum was organised where students, academics and other speakers voiced their opinions. Students were allowed to demonstrate on campus but Suharto had explicitly prohibited all public demonstrations. Nevertheless, the students left campus and marched into the direction of the parliament at 1.30 in the afternoon. 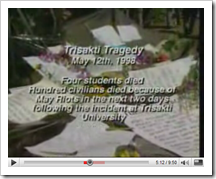 Although most students demonstrated peacefully, the rally turned violent later in the afternoon. The students were blocking the traffic at one of the main arteries of Jakarta. The security forces stopped the thousands of students while they were on their way to the Parliament building. For hours there was a stand off between the students on the one hand and the police and security forces on the other. Somewhere around 5 PM, the students negotiated a solution. They agreed that one row of students would back off for every row of police that did the same. But then suddenly the security forces started shooting with rubber and live bullets to the students who were running back to the campus grounds. At the end of the day, four students lost their lives. Elang Mulya, Hafidin Royan, Hendriawan Sie and Hery Hartanto later became ‘the heroes of the reformation’.

The tragedy remains surrounded by mysteries. There has been talk about infiltrators of the security forces, disguised as Trisakti alumni, who provoked the peaceful demonstrators. Rubber bullets were used by the security forces, but it remains unclear where the live ammunition came from. The fact that the air was filled with teargas only added to the confusion. The Trisakti Tragedy was followed by one of the cruelest events in Indonesian history. In the two days after the events at Trisakti University, thousands were killed in the May 1998 riots. The mysteries surrounding these events and the involvement of government forces also remain unsolved.

Many investigations have been conducted into the Trisakti tragedy and the events afterwards, but many questions remain. Calls upon the Indonesian president Susilo Bambang Yudhoyono and on the Indonesian judiciary to reopen the investigations have until now remained unanswered. Maybe the tenth anniversary of these events would be a good occasion to review this decision…