This weeks’ edition of University World News has a special on academic freedom. Most of the European coverage in this edition is based on a recent article in the journal Higher Education Policy: Academic Freedom in Europe: A Preliminary Comparative Analysis by Terence Karran. The outcomes of the article raise interesting questions. Not just on the different levels of academic freedom in different countries, but also about the nature of academic freedom and its value.

On the basis of comparative data from 23 states within the European Union, the article concludes that academic freedom is highest in Finland, Slovenia, the Czech Republic, Hungary and Spain. The lowest levels of academic freedom can be found in countries such as the United Kingdom, the Netherlands, Denmark and Sweden. Not exactly what most readers would expect, I guess.

So how does the author operationalise academic freedom? Basically it is measured on the basis of five dimensions: (i) Constitutional protection; (ii) Specific legislative protection; (iii)Self-governance; (iv) Appointment of rectors; (v) Academic tenure. The first two refer to the question whether freedom of speech and academic freedom are legally embedded in a nation’s constitution and other legislation. The other three refer more to the way higher education in a country is organised and governed. Let’s have a look at both the legal and governance dimensions to explain the surprising outcomes. 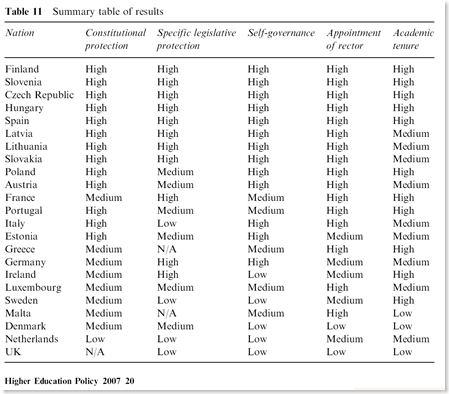 Let’s first look at the legal framing of freedom of speech and academic freedom. My calculated guess is the following. Countries with a recent past of suppression and authoritarianism include freedom of speech and academic freedom more explicitly in their constitutions and legislative frameworks. The countries with high constitutional protection of the freedom of speech are Finland, Slovenia, Czech Republic, Hungary, Spain, Latvia, Lithuania, Slovakia, Poland, Austria, Portugal, Italy and Estonia. Most of them are former communist states or states that used to be under authoritarian rule. The high constitutional protection might thus be a logical result of historical events. And, after all, there are also things like unwritten rules and norms in a democratic society…

But more interesting are the three dimensions related to governance. My bold conclusion is that Karran here confuses academic freedom with academic power. The tree dimensions used here boil down to this: collegial governance, academic appointment of leadership and unconditional tenure of academics provide a high level of academic freedom. This seems to be rather straightforward. And indeed, it is also somewhat contradictory to the reforms that have swept countries like the UK, the Netherlands and Denmark (and many throughout the rest of the world). These countries have given increased autonomy to their universities, often leading to stronger institutional leadership (as opposed to collegial, academic governance). But they were given that power to respond better to social and economic problems. Looking at Karran’s ‘ranking’, I would guess that institutional autonomy is negatively correlated with (his interpretation of) academic freedom.

So is academic freedom the same as academic power? If we answer this affirmatively (as the article does, in my opinion), my question would be: is academic freedom as valuable as it is believed to be? I think academic freedom is a valuable good. But at the same time, I don’t think academics by definition have the exclusive right to determine what issues are important enough to be taught and researched. I’m not so convinced they are all capable of that. In my view, students, governments, public agencies, industry, NGO’s and foundations might provide a useful contribution to this process.

Many recent reforms have as an explicit objective that universities become more responsive to societal and economic needs and that  they become accountable to the public (whose money they are spending after all). So if academic freedom is equivalent to academic power, I’m not that worried if some of that power now has to be shared with other constituencies! After all, in a free society, power should be dispersed amongst many rather than concentrated in a few…