I ran into some interesting papers and essays on the issue of English as the lingua franca of contemporary higher education and science. They raise serious questions about the preservation of ‘scientific languages’, the ability to learn and teach in a non-native language, the homogenising tendencies of a lingua franca and even about flexible interpretation of plagiarism…

Some time ago, biophysicist Stefan Klein wrote an article for the Frankfurter Allgemeine about languages and science (Dümmer auf Englisch; English translation here: Dumber in English). Klein wants to ensure the future of German as a language of science and presents some good arguments for it. Roughly, his argument is that the move towards English as a lingua franca makes science elitist and (non native English speaking) scientists dumber. For the first issue Klein refers to a seminar he attended:

All the speakers – six Germans, plus three from the United States and one from Great Britain – were outstanding. And they all spoke either English or, in the case of a German speaker, now and then something similar. But who in the audience spoke English? No one. (…) As someone from the sponsoring foundation told me, of course it would be better if the local guests would simply speak German. This would increase the public resonance. But the professors had another idea. Their argument: People only take a conference seriously when English is the official language.

Klein doesn’t plea for abandoning English as a language for German science but argues that scientists should be accountable to the public: “how do they expect to win the sympathy of a public with which they no longer even have language in common?” He claims that German should remain the language for seminars and lectures. At the same time, the communication media for the experts and specialists can be in English. Klein:

It shouldn’t hurt German scientific language if, in the course of everyday research, publications appear in English. Such articles almost always deal with tiny advances in knowledge – like the question of whether or not gene X is expressed under the influence of protein Y. They are oriented towards a small audience, they seldom influence scientific concepts and they are, even if composed by native speakers, usually linguistically as outstanding as a manual for a DVD player.

In relation to the second issue, Klein refers to researchers in Sweden and the Netherlands who found that “we are dumber in English”. Test results were about ten percent lower on average in English taught courses than in courses taught in the mother tongue.

In English seminars, students ask and answer fewer questions; they give the overall impression of being somewhat more helpless. Neither students nor teachers are generally aware of the problem, because they all overestimate their expertise in English.

By now, English is the sole language used in lectures in 250 out of 1,976 advanced educational fields in Germany (“master’s degree” programmes). Should this development continue, it would mean certain death for German as a language of research. In Sweden’s most renowned university, in Uppsala, they already are considering offering more programmes in Swedish or returning completely to the mother tongue for basic studies. 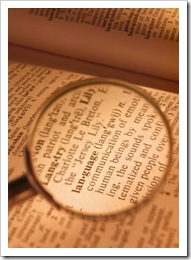 In continental Europe – and especially Northwestern Europe – you can see a trend where more and more Master’s programmes are taught in English. This of course facilitates international mobility (and the attraction of full fee paying non EU foreign students) and it equips graduates with a global language, something that is especially important in the more globalised, small countries in northern Europe. On the other hand I share the worries of Klein about the disadvantages of learning (and teaching!) in a non-native language. But this issue can partially be solved by improving English teaching, introducing English in early stages of education and by immersing children with the English language at a young age. In my opinion, all this doesn’t necessarily negatively affect the use of the native language.

Clearly, the necessity to become fluent in English becomes less when the native language is widely spoken. The risks of loosing German (or French and Spanish) as a language of science is far less than the risk of loosing Dutch or Swedish as a language of science. First of all there’s simply more users of the language, creating more opportunities for using it as a language of academic communication and publishing. Secondly, small languages are often spoken in small countries, which again are more pushed towards the use of English in other sectors of public life, especially in business.

Another interesting essay on the issue comes from Phillip Altbach from the Center for International Higher Education. He addresses some additional downsides of The Imperial Tongue, and especially the homogenising tendencies related to it:

The use of English as a lingua franca and the tendency towards homogenisation is especially apparent in online distance education. In a paper in the Higher education Quarterly (Don’t leave me hanging on the Anglophone), Simon Marginson discusses the failure of English language global e-learning. Among other things, he argues that for exporting universities, the potential of cross-border online education can only be realised if communications are customised for cultural and linguistic variations.

In his paper, Marginson focuses especially on the Asia Pacific region. The problematic point here is of course that students demand the use of English, especially because it becomes more widely spoken in everyday business life in this region, especially in Malaysia, Singapore, India and the Philippines (and increasingly also in Indonesia or China). This might create a paradox where the more the programmes become customised for cultural and linguistic variations, the less ‘marketable’ they become.

An interesting additional issue related to academic publishing recently came to the fore in Nature. For native English speakers it is not just easier to write in correct English, but also to use the language in an esthetic and artistic way. This point might be even more true for the social sciences and humanities than for the natural sciences, life sciences and engineering. But nonetheless, this response to an accusation of plagiarism in Nature struck me:

The accusations made by arXiv that my colleagues and I have plagiarized the works of others, reported in your news story ‘Turkish physicists face accusations of plagiarism‘ (Nature 449, 8) are upsetting and unfair.

It’s inappropriate to single out my colleagues and myself on this issue. For those of us whose mother tongue is not English, using beautiful sentences from other studies on the same subject in our introductions is not unusual. I imagine that if all articles from specialist fields of research were checked, similarities with other texts and papers would easily be found. In my case, I aimed to cite all the references from which I had sourced information, although I may have missed some of them.

Borrowing sentences in the part of a paper that simply helps to better introduce the problem should not be seen as plagiarism. Even if our introductions are not entirely original, our results are — and these are the most important part of any scientific paper.

In the current climate of ‘publish or perish’, we are under pressure to publish our findings along with an introduction that reads well enough for the paper to be published and read, so that our research will be noticed and inspire further work.

And it’s not just the academic community that is wrestling with the language problem. The ubiquitous use of English in the global economy raises many new issues as well, as shown by this Wall Street Journal article.