Ok…I seriously had the intention not to pay too much attention to the THES ranking this year. So this will be the last post about it (of course not the last post about rankings in general and their dynamics). I played around a bit with the data in Excel and had a look at it from a country perspective.

I gave a score of 200 for the number one university (Harvard) and 1 for the number 200 (RMIT; U of Cape Town) etc., and than aggregated these scores for every country. The graph below shows that the United States (with 57 universities in the top 200) and the United Kingdom (with 32 universities) are clearly superior to all other countries: 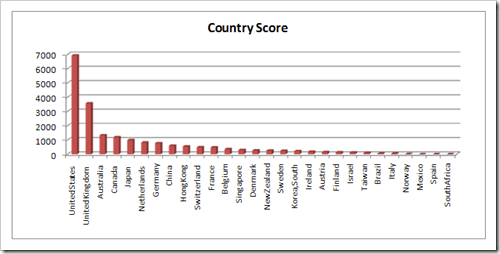 But of course, that can be expected for a country with more than 300 million inhabitants. So lets control for the population of each country. Clearly, the smaller countries like Hong Kong (ok…not exactly a country), Singapore and Switzerland are doing well, while the United States falls to a position somewhere in the middle. Populous Asian countries like Japan and China also fall behind.

Another way to look at country performance is by controlling it for GDP (PPP; IMF Data). The picture remains rather similar, although here New Zealand leads the pack.

So what can we conclude from all this? Well, considering the methodology of the ranking, not too much. My main conclusion would be that MS Excel 2007 makes nicer graphs than MS Excel 2003.