Last month’s Far Eastern Economic Review included an article by Simon Montlake on Singapore’s Global School House strategy. The strategy has been formulated to contributes to Singapores development as a regional and global hub for research and development and – in Montlake’s words – to shed a reputation as a stodgy, scripted society, where creativity is dulled by overzealous government regulation.

The strategy targets a growth in foreign students from 80,000 now to 150,000 by 2015. This growth obviously cannot be solely absorbed by Singapore’s two major universities, NUS and NTU and therefore Singapore is creating linkages with foreign partners. Not just out of necessity, but – according to Montlake – also as a matter of prestige:

Singapore also wants to tap this growing market. While its homegrown universities have some appeal to other Asians, a far juicier prize is to partner with a prestigious Western school, essentially outsourcing world-class education to Singapore.

He states that, since 1998, around 16 universities have forged linkages with local institutions, typically in the form of joint graduate programs. In a recent article in the journal ‘World Development’, Kris Olds (University of Wisconsin and Global HigherEd) identifies 25 of such ventures (click picture to enlarge): 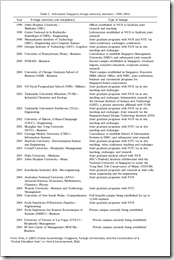 Most of these initiatives are modest in scope, and several have been successful. However the Singapore government has slowly been expanding its ambitions by luring whole foreign university campuses to the country. Montlake observes that this has presented slightly more difficulties for the Singaporean government:

Persuading Harvard to open up in Singapore—and dilute its premium brand—sounds like a pipe dream. But surely other, less haughty foreign universities could be induced to take the plunge, given the right incentives and a forward-looking strategy? Singapore has never made any secret of its large financial resources and its willingness to use them to promote industries in which its governing elite believe it has an edge over competitors, such as biotech and environmental services.

I’ve written several posts on the developments in the past years. The University of Warwick declined Singapore’s offer to establish a campus in Singapore (due to worries about academic freedom and financial risks) while the University of New South Wales did proceed with the venture, but ultimately had to close its doors after three months in operation. In my latest post on the issue I have tried to give some explanations for the UNSW Asia debacle but attributed the failure mainly to an internal conjuncture of events, mainly the combination of overambitious managers and frequent change of leadership. But these explanations leaves open the question why the global schoolhouse strategy is moving forward so difficultly.

For all the money it showers on arts and culture and promoting multicultural events, Singapore’s main pastime is still shopping. Perhaps it needs to take more seriously its campaign to make the city fun. Decades of single-party, paternalist government has bred political apathy. Singapore wants to attract foreign talent, but doesn’t let its own citizens speak out of turn.

Olds applies a broader perspective and questions the viability of institutional globalization in general:

…the failure of the Singaporean Economic Development Board to convince globally recognized research universities (e.g., MIT, Stanford, Imperial College), as well other research active universities (e.g., the University of Warwick, LSE), to establish overseas campuses in Singapore highlights a disconnect between Government of Singapore policy goals and the reality of institutional globalization in higher education at this point of history.

I myself have been skeptical about universities establishing branch campuses in countries where governments cannot guarantee academic freedom and other basic principles such as the equality been men and women (for instance as is the case in higher education in Saudi Arabia and KAUST). On the business side of the story, my skepticism is at least as big. Especially in the case of public institutions, steps to start operations across borders need to taken with caution. The losses of failed ventures abroad will eventually be passed on to the students.

On the other side, there are clear mutual benefits that can come out of these initiatives. Importing countries can expand their access to higher education and improve their quality. At the same time, exporting institutions can utilise their expertise to do this efficiently and use their legitimacy to do this according to their own principles and act as a driver of change.